This article is from our Febooti archive, it was relevant then, and I think that it is still relevant today (a few details changed).
Previous article: Stopping a DOS batch file. 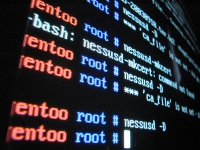 With the information covered so far we are able to use batch files to make our lives easier, and help our day to day computing operations. However, we could make our batch scripts more sophisticated by avoiding the big limitation that we have been faced with so far. That is – our files are hard-coded (written in stone, so to speak) and if we want to manipulate a file, we have to change the batch script again and again.

Either a space or a comma character separates each parameter. Both are treated the same. Now, how many replaceable parameters does the above line have? The obvious answer would be five. This would be wrong. DOS counts the name of the batch file itself as a parameter, so there are 6 replaceable parameters on this line. Much like other programming languages DOS names them %0, %1, %2, %3, %4, %5 rather than %1 through %5.

The first 2 lines are remark statements that show the name of the file and a brief description of the program. The third line echo’s the first replaceable parameter entered on the command line. If replaceable parameter was not entered, the command will display the Echo is on message (just like with simple ECHO command). The fourth line shows the 2nd parameter. The fifth line shifts the argument. The line 6 acts like line 4, but because of SHIFT, it and echo’s third argument. SHIFT command allows to use more than 10 parameters / arguments in the batch file:

And, note: we do not access fourth parameter (%4), so it is not shown in the console. Also, see the screenshot from Windows 8.1 CMD.exe:

Next article: Loops in the Batch files with examples.